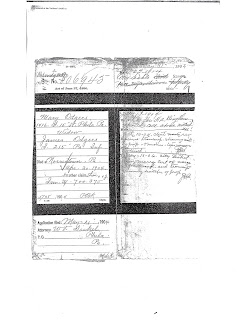 This Civil War Pension application was filed 16 May 1893 by my paternal third great-grandfather.  He was 59 years old.  At the time of this filing, he was living at 1416 South 15th Street in Philadelphia, Pennsylvania.  The same home he was living in during the 1900 Census - the last census taken before his death in 1904.

This application lists him as being a sargent in Company I of the 215 Pennsylvania Infantry.  The 215 Regiment was organized in the city of Philadelphia in April 1865, at the end of the Civil War.  It also states that he is alleging that a ruptured cataract of his eye, rheumatism, and varicose veins were caused by his time serving in the Union Army, and that is why he deserved a pension from the United States Government.
I am very curious as to how these ailments can be linked to his time served during the Civil War.  As far as I know, these ailments tend to happen as one gets older and not necessarily from trauma. 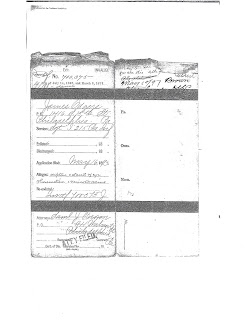