This certificate of Death is dated June 18, 1904 and is found in the Civil War Pension File of my paternal third great-grandfather.  He died on April 30, 1904 at the age of 76 in the State Hospital for the Insane in Norristown, Pennsylvania.  His cause of death is listed as uremia - a condition involving abnormally high levels of waste products in the blood.  It is likely that his kidneys were no longer filtering properly, which may have been from some type of kidney disease.

This certificate was received by the Pension Office on July 18, 1904. 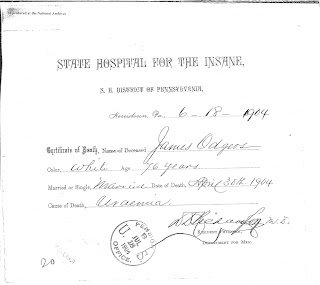