My maternal great-uncle died on 22 July 1944.   He was buried in an individual grave, uncasketed and in a poncho, in Guam No. 2 Cemetery, Plot C, Row 2, Grave 10.  He was disinterred on 28 November 1947 and his skeletal remains were placed in a casket on 19 January 1948.  On 11 February 1948 his remains were placed on a truck and left the U.S. Mausoleum on the island of Saipan.  Two days later his remains arrived at the Port of Saipan.  On 26 February 1948 he departed Saipan aboard the United States Army Transport Walter W. Schwenk.  His remains arrived at Fort Mason in San Francisco on 23 March 1948.  He then traveled by rail to Philadelphia, Pennsylvania, arriving on 31 March 1948.

Before William Bunting's remains traveled to his final resting place, The Beverly National Cemetery in Beverly, N.J., the exterior of his casket needed a touch up.  It needed to be repaired and repainted.  The Nearly three months of travel had taken its toll on the casket. 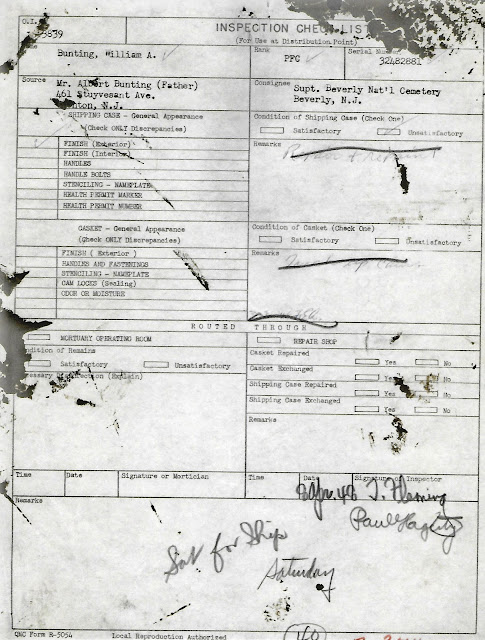