During and after World War II the Graves Registration Service was responsible for the identification and proper burial of American servicemen who died overseas.  Policies governing this work were set by The Quartermaster General.  The service was responsible for the identification and burial of all Army, Navy, Marine, and Coast Guard personnel who lost their lives as the result of service outside the continental limits of the United States.  The American Graves Registration Service took charge of the remains and cemeteries.

During World War II, identification tags worn by service personnel or papers found on the remains, would, in most cases, serve to identify the body.  In the absence of the metal identification tags, fingerprints and a dental chart were used to establish identity.  A record was then made, giving the exact location of the temporary grave in which the remains were interred. A Report of Interment form provided for the recording of every physical detail which was used as a means of identification.  This was done to lessen any possibilities of error.

This Western Union telegram confirms that my maternal great-grandparents chose to have military funeral services done by a Catholic chaplain at the Beverly National Cemetery for my great-uncle. 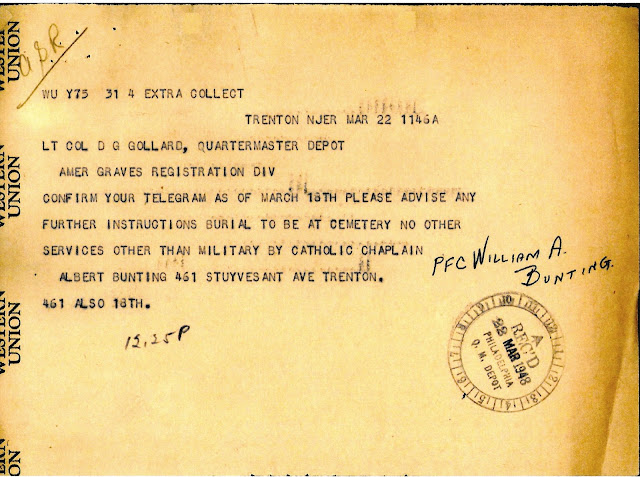