This is a copy of my maternal grandfather's cumulative record which includes information about his parents and past educational, occupational, and military experience.

My great-grandfather died when my grandfather was nine years old.  When he finished grammar school, my grandfather got a job to help support his family.  At the time he signed his application to join the CCC,  he had been unemployed for two years.  He left his job as a grocery clerk in December 1932 at 15 years of age.  $25 of his $30 a month earnings while in the CCC was sent home to his mother to help support his family.  Most men in the CCC did the same, naming their mothers as their dependent relative.

My grandfather was in the CCC from 1934 to 1938.  He entered when he was 16 years old and was discharged when he was 19 years old.  He was in two companies and two different camps during that time.

His birth date appears to be 8 November 1917 on the first form, but it really was 18 November 1917.  It just may be the quality of the copy of the form or a written mistake.

Most of my grandfather's time was spent doing mosquito control in Lewes, Delaware.  His unit drained mosquito-infested swamps on Delaware farms by digging drainage ditches leading away from the marshy areas. Stagnant ponds and streams, mosquito breeding places, were freshened by pumping fresh water into the stagnant water areas. The fresh water killed the mosquito larvae.

During his time in the CCC my grandfather's interests included sports, reading, leather craft, and flowers.  He also earned certificates in first aid and cooking.

He was discharged on 8 April 1938 when his enlistment expired.  He left without having a new job secured, but in the 1940 census he was working in a smoke house. 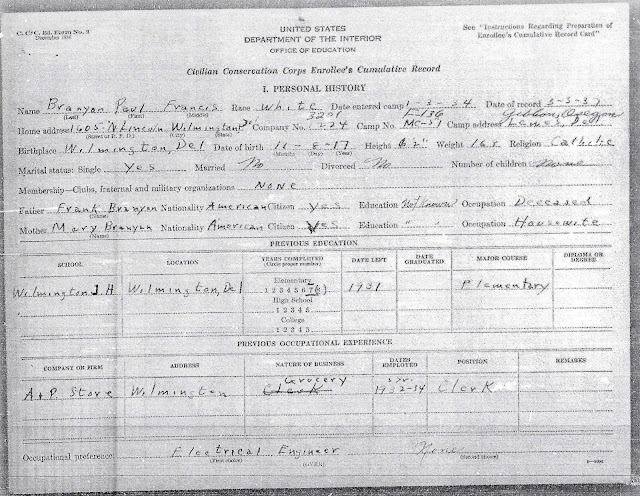 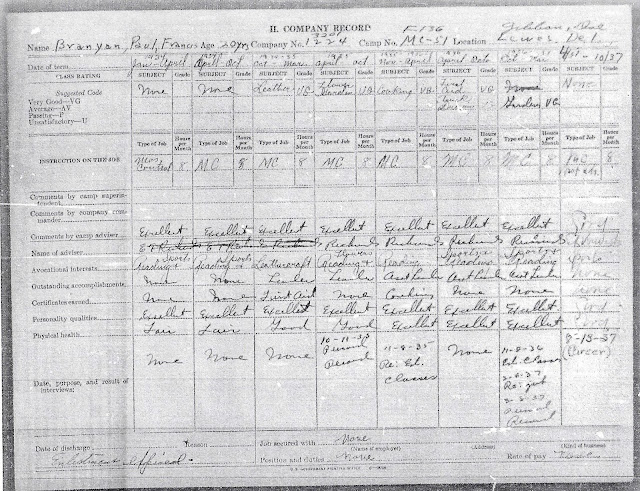