This General Affidavit is a part of my my third great-grandfather's Civil War Pension File.  This was filed in Philadelphia, Pennsylvania on 15 January 1902, when he was 70 years old.  At this time, he was living at 1416 South 15th Street in the same city.  He had to explain under oath why he sometimes left his mark instead of signing his name.


Affiant states that he is the identical person who is applying for an increase pension by ctf #700375 James Odgers and in answer to the Commissioner of Pensions letter hereto attached wherein he is required to state under oath as to why he sometimes signs his name and at other times makes his mark.

My third great-grandfather's response to this inquiry was that at times his eyesight was bad and his hands shook too much for him to be able to write his signature.  At 70 years old, he was elderly and these could have just been symptoms of his age.

His symptoms must have been present at the time this Affidavit was taken, because instead of his signature, he left his mark. 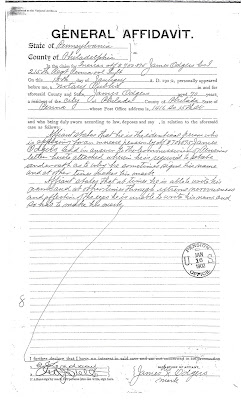 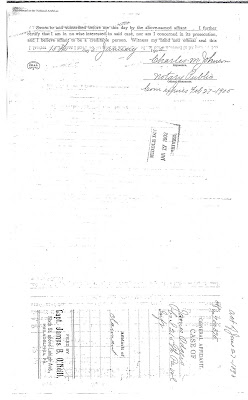