This short note is found in the Civil War Pension File of my paternal third great-grandfather.  The number on the top is his file number.  The note states that his claim that he acquired his rupture (hernia) while he was serving in the Union Army at the end of the war has been rejected.  There was no record and no evidence provided that the injury occurred while he served as a Union soldier, nor in the line of duty.

He also alleged that his varicose veins were incurred at the same time of his rupture, so this was also rejected.  He was approved for a cataract and rheumatism because this was not alleged to have occurred at the time he served in the Union Army. 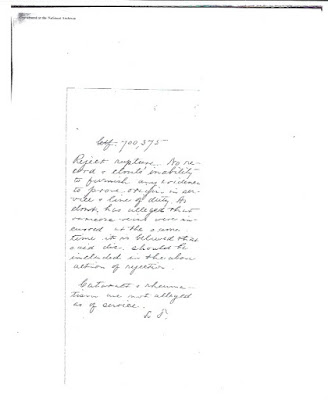