This form is found in the Civil War Pension File of my paternal third great-grandfather.  It was originally submitted by his attorney, E.J. Lindsay, on March 27, 1902 and then again on March 30, 1910 by my widowed third great-grandmother.  They were both seeking an increase in the amount of his monthly pension.

He had qualified for the pension from the United States Government by serving as a private in Company I of the 215th Pennsylvania Volunteer Infantry at the end of the Civil War.  He enlisted on April 8, 1865 and was discharged on July 31, 1865.

My third great-grandfather claimed that while in the Union Army in July of 1865 at Fort Delaware, he incurred a rupture (hernia) and varicose veins and that he had suffered with that along with a cataract of the eye and rheumatism ever since his discharge.

At the time this form was originally filed, he lived at 1416 South 15th Street in Philadelphia, Pennsylvania.  That address is crossed out and 3101 Madison Street was written.  This address is where my third great-grandmother was living at the time she filed for an increase in the monthly pension.

The pension increase was rejected because there was no medical record or other satisfactory evidence of existence of the hernia and varicose veins while he served in the Union Army nor at his discharge, and my third great-grandmother was also unable to establish the origin of these injuries.  The cataract and rheumatism were dismissed as they were not claimed at the time of military service. 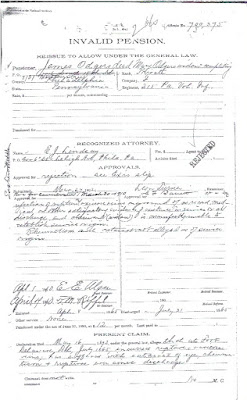