Surgeon's Certificate of May 29, 1901: EXAMINATION--Continued

This form is found in the Civil War Pension File of my paternal third great-grandfather.  He was seeking an increase in the monthly pension he qualified for by serving in Company I of the 215th Regiment of the Pennsylvania Infantry at the at the end of the war.

The doctor doing this exam believed the cause of my third great-grandfather's impaired vision was due to a failed previous cataract surgery, as there was still some of the cataract remaining.  The doctor believed that eye strain caused by astigmatism would have been a cause of the cataracts.  He recommended that another operation might improve the cataract.

My third great-grandfather also complained of rheumatism in both of his shoulders.  His lower limbs were also stiff and his joints were limited in movement.  This is somewhat expected since he was 70 years old at the time of this exam.

He also had a double inguinal hernia and he wore a double truss.  On his right side, he had a pigeon's egg sized protrusion from the hernia and an even larger protrusion on his left side. Both could be clearly felt when my third great-grandfather coughed.  The truss that he wore would have pushed in the protrusions and helped ease some of the discomfort.

The surgeon noted that my third great-grandfather's face appeared flush, but he could find no evidence of alcoholism or other vicious habits.

My third great-grandfather was a patient at Wills Eye Hospital, under the care of a Surgeon Thompson, two years prior.  That is when he had his first cataract surgery.  He had another one a year prior to this exam.  Both procedures were done with an iridectomy, which would have removed part of his iris. 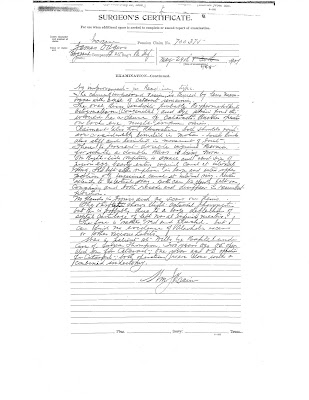 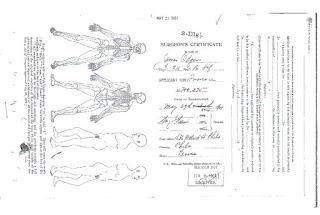