This Surgeon's Certificate is found in the Civil War Pension File of my paternal third great-grandfather.  He was asking for an increase of his $8 monthly pension.  A pension that he earned while serving in Company I of the 215th Regiment of the Pennsylvania Infantry at the end of the war.  Those $8 would be about $250 today.

This certificate was filed on November 21, 1900 in Philadelphia, Pennsylvania .  At that time, my third great-grandfather was living at 1416 South 15th Street in the same city.

He was claiming that a hernia, impaired vision, rheumatism, varicose veins, senility, and blindness were the causes of his disability.  He was unable to do any manual labor and was being supported by his children.  He was a machinist by trade.

At the time of this examination, my third great-grandfather was 66 years old.  He stood five feet eight and a half inches tall and weighed 178 pounds. He was noted to be a healthy looking, well nourished muscular man, and despite him having been a machinist, he had soft palms.

He had a double complete inguinal hernia on his right side, which had caused a tumor the size of a black walnut.  The hernia was well supported by a truss.  This would have kept his protruding tissue (the tumor) in place and relieved some of his discomfort.

My third great-grandfather was blind in his left eye due to a cataract.  His right pupil was immobile.  He was able to discern light from darkness in that right eye, but that was all he could see.

He had a severe varicose vein in his right leg that ran from his upper thigh to his ankle.  He had a brownish discoloration around the lower third of his leg.  This was all marked on the included diagram.

As for his rheumatism, he had marked creaking in his shoulders and knees, which would cause him difficulty and pain.  Other than that, he had no other muscular or joint deformities.

At the end of this exam, the doctors recommended an increase of the pension to $12 a month, due to all of my third great-grandfather's disabilities, which left him unable to perform any manual labor.  That $12 would be about $370 today. 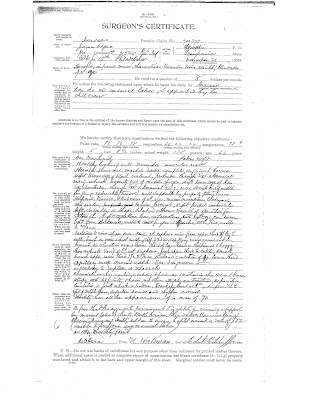 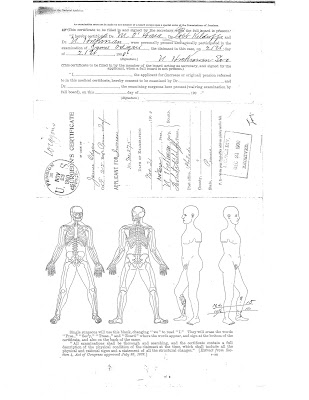