This is an Index Sheet found in the Civil War Pension File of my paternal third great-grandfather.  The list begins on 2 September 1890, when he originally filed for his pension under the Act of June 27, 1890, which provided a pension for any veteran of the Civil War that served for the Union Army.  He had served for a short time at the end of the war with Company I of the 215th Pennsylvania Volunteer Infantry.

This Index Sheet lists all of my third great-grandfather's increases and requests for increases in his Pension.  The list ends with the date of 27 November 1901, with the testimony of two of his acquaintances, William White and Willet Walton, on his behalf. 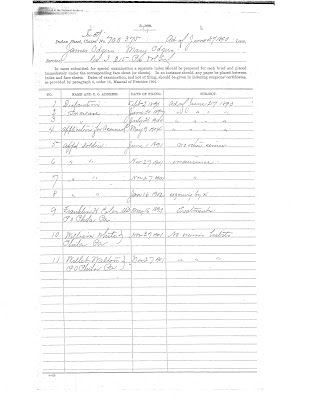