Declaration For An Original Invalid Pension May 12, 1893

This form is found in the Civil War Pension File of my paternal third great-grandfather.  It was filed on May 12, 1893 in Philadelphia, Pennsylvania by his attorney, Samuel J. Brown, who had an office at 911 Walnut Street in Philadelphia.

At the end of the Civil War, my third great-grandfather enlisted in the Union Army in April 1865 and was commanded by a Colonel Rush in Company I of the 215th Regiment of the Pennsylvania Volunteer Infantry.  He was discharged from the army at Fort Delaware on August 15, 1865.

He stood five feet, eight inches tall.  He had a light complexion and brown hair and blue eyes.  He was 61 years old and was living at 1416 South 15th Street in Philadelphia.

He was claiming that in the line of duty while at Fort Delaware on or around July 20, 1865 that he was helping some other men with some powder.  The cart was going very fast in circles.  One of the shafts of the cart struck him and ruptured him.  He was discharged the following month and had suffered with cataract of the eye, rheumatism, and the rupture (hernia).  He was also claiming that he had contracted his varicose veins at the same time he suffered his rupture.

The time my third great-grandfather spent in the Union Army during the Civil War is the only time he spent in the military.  He was stating that he was now wholly disabled and unable to work as a machinist, his normal occupation. 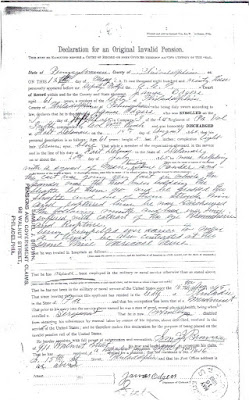 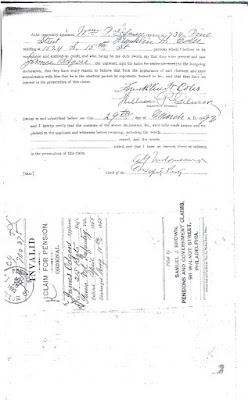