This Surgeon's Certificate is from the Civil War Pension File of  my paternal third great-grandfather, who had served as a private at the end of the war in Company I of the 215th Regiment of the Pennsylvania Volunteer Infantry.  This was an application for a revision to his pension, and it is the first type-written from that I have come across in the file.

This examination took place on March 28, 1894.  At that time, my third great-grandfather was living at 1416 South 15th Street in Philadelphia, Pennsylvania.  He was claiming that an incomplete right inguinal hernia, impaired vision, rheumatism and varicose veins were getting worse and he was unable to do manual labor.  A welder by trade, he was not working at that time and he was being supported by his sons.  He was receiving a Civil War Pension of $6 a month, which would be around $180 today.

At the time of this examination, my third great-grandfather was 62 years old.  He was five feet, eight and a half inches tall and weighed 178 pounds, which caused the examiners to say that he looked obese.  He was also noted to be "florid looking," which means he was flushed.  His hands showed some evidence of work.  These are some great details that help me put a picture to someone I have never seen.

He wore a truss for his inguinal hernia and was convinced it would protrude if he were to not wear it. An inguinal hernia occurs when tissue, like the intestine, protrudes through a weak point or a tear in the abdominal muscle.  This hernia could have been very painful.  The truss would have kept the protruding tissue in place and relieved some of the discomfort.

My third great-grandfather also wore a muslin stocking for his varicose veins.  This would have compressed the veins and helped them to perform properly.

He had a slight creaking in his left shoulder joint, but no evidence of rheumatism in any other muscle, joint, or tendon.

One good thing he had going for him was his heart, or so it seemed at the time of this exam.  He was noted to have a heart rate of 84 while standing and 98 after doing some sort of exercise.

He wore glasses and was totally blind in his his left eye due to a cataract.  It was noted that he had another cataract forming in his right eye.

He was found to be wholly disabled when it came to manual labor due to the cataracts in both of his eyes, the varicose veins in his right leg, his age and obesity. 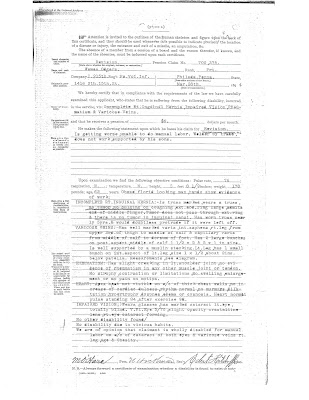 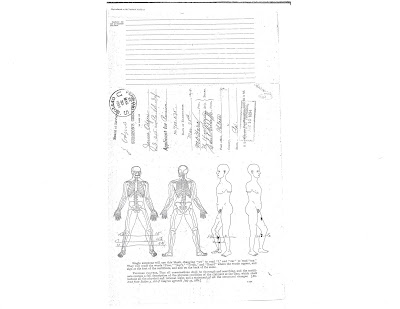