This Surgeon's Certificate is found in the Civil War Pension File of my paternal third great-grandfather.  This examination was completed on June 2, 1891 and was part of his original pension claim.  He qualified for the pension by serving as a Union private for a short time at the end of the Civil War.  He had enlisted in Company I of the 215 Regiment of the Pennsylvania Volunteer Infantry.

At the time of this exam, he was 60 years old and living at 1416 South 15th Street in Philadelphia, Pennsylvania.  He stood five feet eight and one quarter inches tall and weighed 198 pounds.

As part of his pension, my third great-grandfather was claiming that he incurred a rupture of his right side (hernia) and disease of his eyes during his service in the Union Army.  He stated, "I received a rupture while hauling powder during 1865 just previous to my discharge.  I caught cold in my eyes while at Alexandria during same year."

He appeared to be a healthy man at this exam.  It was noted that he had an inguinal hernia of his right side, which allowed a hen's egg sized tumor to protrude.  He had worn a truss for 25 years, which would have given the hernia support and relieved some of the discomfort.

His eyes were congested, with his left having conjunctivitis.  He wore glasses and was able to read relatively well with his right eye, but not his left. 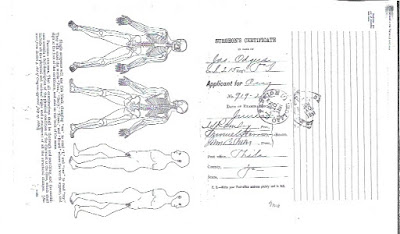