This Death Certificate is found in the Civil War Pension file of my paternal third great-grandfather.  He died on April 30, 1904 at the age of 77 in the State Hospital in Norristown, Pennsylvania, where he had been a patient since December 8, 1903.

His cause of death is listed as ill health and a hernia.  He had been sick for more than five months.

It describes him as a married white male, but it does not list my third great-grandmother's name.  Both of his parents' names are also left blank.  His birth place is listed, Ireland, and it states that he was a machinist.  He was buried in Philadelphia, Pennsylvania and the undertaker was an R. P. Morton. 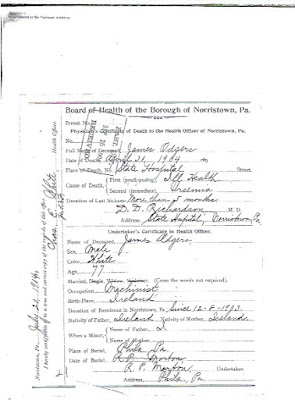