This deposition is found in the Civil War Pension File of my third great-grandfather.  He had earned the pension by serving as a Union soldier for a short time at the end of the war.  After his death, my third great-grandmother had to legally file to continue getting his pension.

Since she was unable to provide a marriage certificate, she had to find other ways of proving her marriage.  This deposition from Margaret Stewart was an attempt at doing just that.

Ms. Stewart was 70 years old and lived at Andrews and Clifton Avenues in Collingdale, Pennsylvania.  She was an acquaintance of my third great-grandparents and testified that she believed that they had been married on December 31, 1854 and it was the only marriage for the both of them. 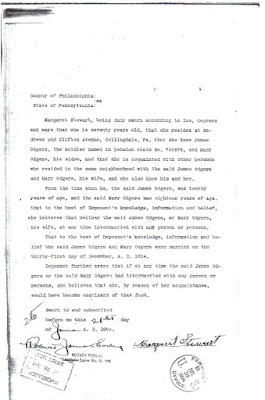