My third great-grandmother was unable to provide a marriage certificate, so she had to provide other proof that she had a valid marriage and was qualified to receive the pension as a widow of a Union Soldier.

Robert E. Henderson of 1428 South Broad Street in Philadelphia, Pennsylvania was an acquaintance of my third great-grandparents.  He stated he had lived with them from about 1866 to 1876.  When I looked at the 1870 census, there was no mention of him living with them, so maybe his timing is a little off.

He testified that as far as he knew, they were married on December 31, 1854 and had cohabited as husband and wife until December 31, 1903, when my third great-grandfather was committed to the State Hospital for the Insane at Norristown, Pennsylvania by order of the Court of Common Pleas for the County of Philadelphia. 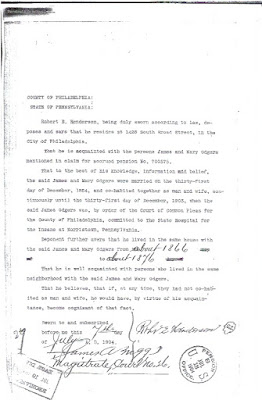