She had hired an attorney, Rowland C. Evans, to search public and church records for proof of her marriage.  He had an office at 14 South Broad Street in Philadelphia, Pennsylvania.

He first requested the marriage record from the Registration Bureau for Births and Marriages of the Bureau of Heath.  He was informed that the bureau began in 1862.  That was no help since my third great-grandparents had been married in 1854.

Mr. Evans testified that he believed that my third great-grandparents were married on December 31, 1854  by the pastor of the Penn Presbyterian Church, Francis D. Ladd.  Unfortunately, the pastor could not verify this since he had died on July 7, 1862.

After a careful search, Mr. Evans was unable to find any record of marriage, nor could he find anyone who was present at the time of the marriage ceremony. 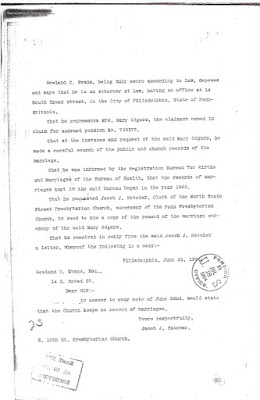 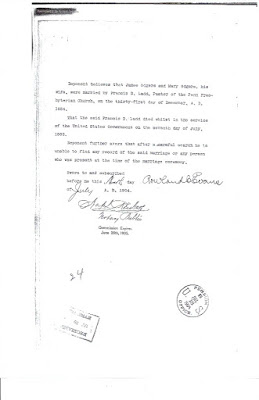