The Authorized Inscription for a Government Headstone

But if he finds his . . . ancestor's name and position in full therein inscribed he will be satisfied that a grateful country had done due honor to the soldier whose sacrifice is one of the proud recollections of his family history.  — General Meigs, Memorandum, Quartermaster General's Office, February 8, 1873

The basic information on a Government headstone application for World War II casualties included the name of the veteran, rank, company, regiment or vessel, date of death, the name and location of the cemetery, and the date of application.  The information was supplied by the Superintendent or Commanding Officer and the next of kin.  After receiving a completed application, the quartermaster clerks would verify the information on the applications.  Pencil marks are often found where clerks made clarifications regarding details of service.

A Government-issued headstone included the State from which the veteran came, a religious emblem in a small circle above the inscription on the face of the headstone, and the dates of birth and death.

This application was for my maternal great-uncle who was killed in battle on 22 July 1944.  The application was filed in 1948 because that is when his body was shipped home for burial at my great-grandparents' request. 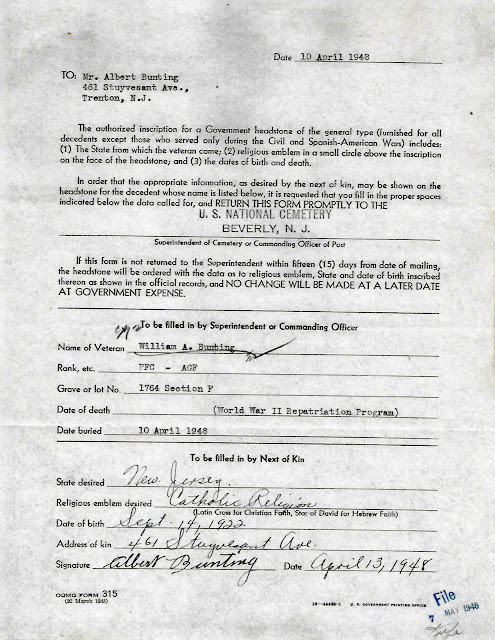 This is a link to William A. Bunting's Find A Grave Memorial Page.

Email ThisBlogThis!Share to TwitterShare to FacebookShare to Pinterest
Labels: 1940s, 1944, 1948, The Authorized Inscription for a Government Headstone, World War II