The Civilian Conservation Corps existed between 1933 and 1942.  It employed millions of unmarried men between the ages of 17 and 25 on projects in rural areas owned primarily by federal, state, and local governments. The men served a term of six months, but they could serve up to four terms. They earned $30 a month, $25 of which was sent home to their families.

This is a copy of my maternal grandfather's Individual Record form.  It includes some general information about him.  A couple things stand out to me.  First, his birth year is wrong.  He was born in 1917, not 1916.  Was this a typo or did he lie about his age?  He would have been 17 at the time he joined the CCC, so I think it is a typo.  The second thing that stands out is the original typed address for his mother and himself have been crossed out and a new address has been handwritten.  His family must have moved in the time he signed up and the time he signed this form.

On this form my grandfather states he had been unemployed since December 1932, more than two years before he entered the CCC.  This would make him the perfect recruit since the young men had to be unemployed and recommended by the Department of Labor through a local welfare agency. 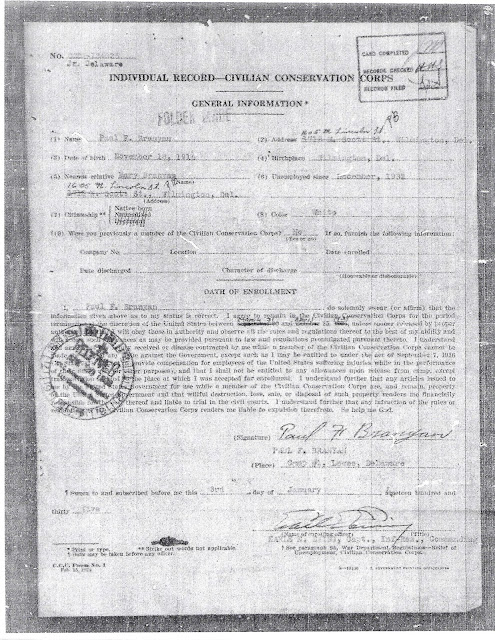