For nearly four years I have been searching for my maternal grandfather and his family in the 1940 Census with no luck.  I figured with a name like Branyan it was probably misspelled.  Armed with the family's address from the 1930 Census I thought I'd be able to find them.  No such luck.  There were different people living in that house.  I thought about looking page by page of the 1940 Census trying to find their names, but that would have been like looking for a needle in a hay stack, not to mention hours of research.  I had just about given up.

Then I requested my grandfather's Civilian Conservation Corps records.  He joined in 1935 when he was 17 years old.  One of the first things I noticed was that on his General Information Form his original typewritten address had been crossed out and a different address was handwritten.  I wondered what the chances were that his family would be at the same address five years later and I would be able to find them in the 1940 Census. 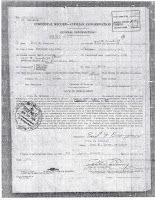 It was time to start digging.  I knew a good place to start would be to find the Enumeration District,  a geographic area assigned to an individual census taker, or enumerator, usually representing a specific portion of a city or county.  I used an Enumeration District (ED) finder and searched by my grandfather's 1935 address.  Once I knew the ED I started looking through the Census page by page searching for that address. When I finally found it, I was disappointed. Another family was living at that address.  But then something caught my eye.  There they were...in the house next door!  Of course I was wondering why they would have moved to the house right next door to the one where they were living in 1935.  But that's a question for a later time.  I finally found my grandfather's family!
at March 31, 2016