Letter to the Quartermaster

During World War II my maternal great-uncle's division left Oahu and arrived in Eniwetok in the Marshall Islands by 1 July 1944.  He moved from Eniwetok on 18 July aboard the transports of the Southern Attack Force to arrive off Guam the morning of 21 July.  During his travels he was probably given last minute instructions and gave his weapon a last check as he prepared to disembark.

The battle began in the early morning hours of 21 July.  My great-uncle's division was called in for support that night.  His US Army Infantry Division, the 77th, were tough fighters and the Marines fighting alongside them at Guam referred to the 77th as the "77th Marine Division."  My great-uncle  was killed in the battle the following day.

This is a copy of a letter that my great-grandmother sent to the Quartermaster.  It was received on 28 November 1944.  She was inquiring if they had received  my great-uncle's personal effects.  She wanted anything of his she could get for keepsakes. 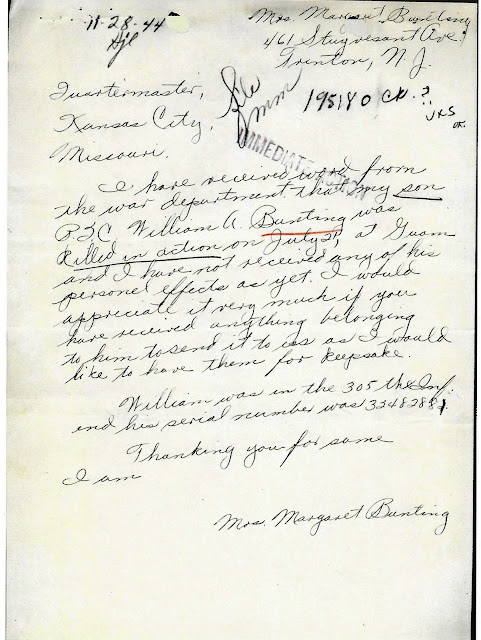