This Widow's Application for Accrued Pension form that is found in my paternal third great-grandfather's Civil War Pension File is one of the most exciting and confusion things I have ever found in my family tree research.

Even more confusing to me is the question as to why my third great-grandmother is filing a legal document as a widow on 5 April 1904 when her husband died on 30 April 1904.  Was she expecting him to die?  I am thinking that maybe the Notary Public wrote the wrong date on the form.  All of the stamped dates say May, not April.

Now, the exciting parts.  My third great-grandmother's maiden name is listed.  I already had found that in my research, but here it is on a legal document and I can confirm it.  It also lists my third great-grandparents' wedding date as 31 December 1854.  In my research I had an estimated date of 1855, which was pretty close, but it is just amazing to have the actual date of their wedding.  And now I know that they were married in Philadelphia, Pennsylvania.

There were two witnesses for this legal document, a daughter to my third great-grandparents - my third great-aunt, and a family friend.  In the document, their daughter is listed as Lucy M. Henderson, but she signed her name Lovey M. Henderson.  Lovey is the name that I have listed in my family tree. At the time this document was signed, she was living at the same address  as her mother.  Was she there with her husband and family?  Did something happen to her husband and she had to go live with her parents?  Did she move in with her mother after her father was committed to the state hospital?  There are a lot of questions that I have.

The second witness signed her name Iva Shaffer, but in the document her last name is spelled Shaeffer and Shaaffer.  These oversights lead me to believe that there is a good chance that the 5 April date really should be the 5 of May. 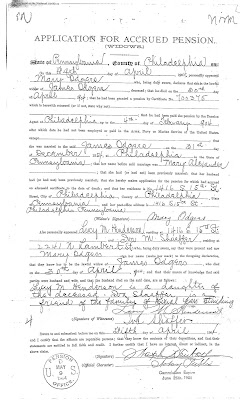 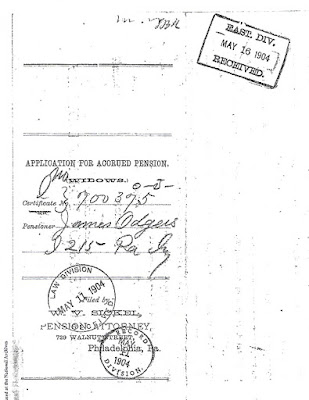