This History of Claim Form is from my third great-grandfather's Civil War Pension File and is filled with a lot of useful information.  His first and only service during the Civil War was with Company I of the 215 Pennsylvania Volunteer Infantry from 8 April 1865 to 31 July 1865, just shy of a total of four month of service.

He also asked for an increase in his pension on 30 June 1897 citing rheumatism, varicose veins and senility.  And there was a pending claim under general law that was filed 16 May 1893. 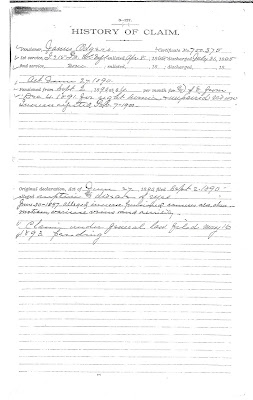