This disability application form is found in my paternal third great-grandfather's Civil War Pension File.  It was filed on 26 June 1897 in Philadelphia, Pennsylvania, as he was asking for an increase in his pension from $8 to $12 a month.

He was receiving $8 a month from the United States Government for a right hernia and impaired vision.  He was asking for an increase to $12 a month citing that he also had rheumatism, varicose veins and senility, and these ailments were leaving him unable to perform manual labor.

Two of my third great-grandfather's acquaintances, William S. Wilkinson and William Whitelaw, were witnesses to him signing his mark.  I know from previous documents that my third great-grandfather was occasionally unable to sign his signature due to failing eyesight and shaking hands.  The day this document was signed must have been one of his bad days.  This form is also signed with a mark by a William White instead of his signature.

My third great-grandfather and both of his witnesses lived in the city of Philadelphia, where this document was filed.  There was no relationship given between any of the men, which leaves me with some questions.  Were they related somehow?  Were they friends or coworkers? The two men were close enough that they signed a legal document for him. Maybe some answers will come with a little more digging. 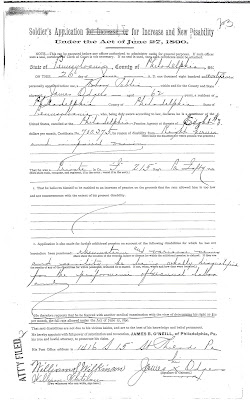 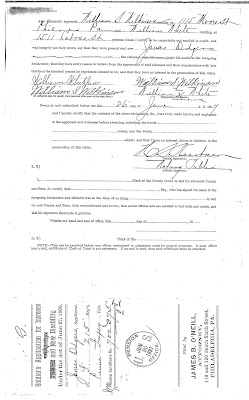