Department of the Interior

This form is from my paternal third great-grandfather's Civil War Pension File.  It is a letter to the Commissioner of Pensions in Washington, D.C. from a Mr. Mulholland in the U.S. Pension Department.  It reads:

So, my third great-grandmother had my third great-grandfather committed as a lunatic.  At first this sounds pretty harsh, but he was 69 years old and suffering from senility, decreasing eyesight, and rheumatism.  He may have gotten to the point where she was unable to care for him and she felt there was nothing else she could do.  He died in the state hospital less than three months later. 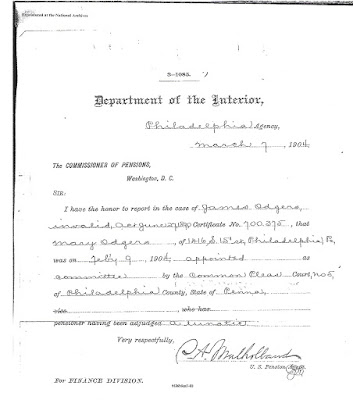