This Declaration For Invalid Pension form is from my paternal third great-grandfather's Civil War Pension File.  This was filed in Philadelphia, Pennsylvania, the city of his residence, on 1 September 1890, when he was 53 years old.  There are a  lot of details on this form that will help in later research.

My third great-grandfather, James Odgers, enlisted on 8 April 1865 in Company I of the 215th Pennsylvania Volunteers and was honorably discharged on 31 July 1865 at Fort Delaware.  He had served for the Union Army for more than 90 days, which qualified him for a pension from the United States Government.  He was asking for a pension due to a right side rupture-disease of his eye.

At the time of this filing, his attorney was W.V. Sickel.  His office was located at 729 Walnut Street, less than two miles from my third great-grandfather's residence on South 15th Street.  According to an ad in The Times newspaper on 7 September 1890, Mr. Sickel specialized in Pensions.

There are a couple things that I find interesting about this legal document.  One is that it refers to what we now call the Civil War as the war of the rebellion.  The other is that it lists a soldier's requirements under the Act of June 27, 1890 to qualify for a pension.  This is the first time I have seen them listed anywhere in my third great-grandfather's pension file.

Also, it is pretty amazing to see an ancestor's signature from over 129 years ago. 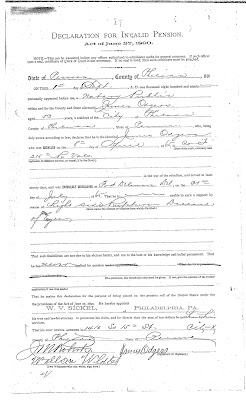 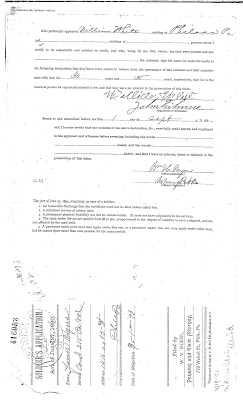